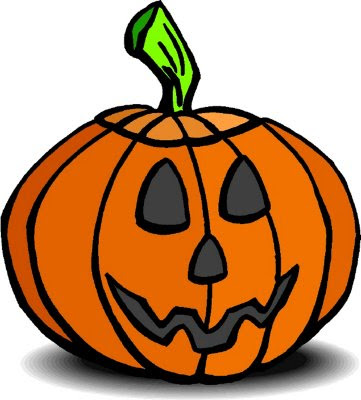 Why didn’t the skeleton dance at the Halloween party?

It had no body to dance with.

What do goblins drink on Halloween?

What do ghosts eat for dessert?

The leader chants each line or every half-line in a soft, slow, sepulchral voice. Children repeat each line in the same way. The telling becomes more ghostly and spooky with each line. The last word is a sudden shout!

And in that dark, dark box, there was a GHOST!

For headbands:  Cut out pumpkin shapes (3 per child).  Have kids decorate.  Glue onto green strips for headband.

Tootsie Roll Spiders – twist 4 black pipecleaners around the lollipop stick which will give you 4 legs on each side, add googly eyes to the center of the pipecleaners (where they twist on the stick), and you have a spider.  The lollipop portion is the back end.

Q-Tip Skeletons – Requires 3 or 4 q-tips placed horizontally, with 1 placed vertically to form spine.  Q-tips for arms and legs, and q-tips cut in half for feet and hands.  Pre-cut skeleton heads.  Glitter glue can be used to make the bones “glow”.

Ghosts – Requires fiberfill.  Trace a big ghost shape on black paper and let them glue the fiberfill on.  Then glue on eyes and an O shaped mouth.

Spider Hat – Cut the inside of paper plates about ¾ of the way around. Bend that part up. Draw a face on it for the spider.  Or glue eyes, cotton balls, circles, etc).  Glue 8 legs that have been accordion folded onto the bottom of the plate.

Paper Bag Jack-o-Lanterns – Requires paper bags, and orange dye.  Open the bags, dip the bags into the dye, bottom first, and give them a few seconds – the more time, the deeper the color.  (wear rubber glove on one hand, and put it inside the bag and push down into the dye bath)

Dissolve 4 teaspoons Borax in 1 1/3 cups warm water and add to other stuff.

Thanks to Elizabeth Murphy

Dissolve borax in water.  Drop food color into glue.  Add 1 Tablespoon of the borax solution ti the glue and stir.  Take the solid blob out of the liquid in the cup and knead with your hands for several minutes.

Thanks to Elizabeth Murphy

ONCE THERE WAS A PUMPKIN

Once there was a pumpkin

And grew  (Join hands before you, making large pumpkin with arms)

And smiles at you  (Swing pumpkin to left)

And you  (Move pumpkin before stomach)

And you  (Swing pumpkin to the right)

Five little jack-o-lanterns  (One hand up)

Sitting on a gate.

The first one said  (Point to thumb)

The second one said,  (Pointer finger)

The third one said,  (Middle finger)

The fourth one said,  (Ring finger)

The fifth one said   (Little finger)

And out went the light  (Close fingers into fist)

And away went the Jack-o-lanterns  (Open hand, fingers run behind back)

I am a pumpkin, big and round.

Once upon a time, I grew on the ground.

Now I have a mouth, two eyes, and a nose.

What are they for, do you suppose?

With a candle inside, shining bright,

I’ll be a jack-o’-lantern on Halloween night.

First I get my black crayon out

And draw a witch and broom,

A pumpkin and a dark black cat

And a full, bright yellow moon.

Next I mix the yellow and blue

And come up with a green;

The most perfect color for a witch’s face

That I have ever seen.

Next I mix the yellow and red

And orange is what I get.

It’s the color of my pumpkin’s head,

But I’m not finished yet.

Lastly, I mix red and blue

And color the witches dress

A lovely shade of purple-gray

And then clean up my mess.

All for us on Halloween!!

Put your claws in…
Stamp your feet in…
Shake your hairy head in….
Put your pointy teeth in….
Jump your monster self in…..
AND SCARE THEM ALL AWAY!

I am Mister Pumpkin big and round

Once upon a time I grew on the ground

But now I have a mouth, two eyes and a nose

(Point to each feature)

What are they for – do you suppose?

When I have a candle inside shining bright

(Put one fist on top of the other, then move fingers of top hand up to show flame)

I’ll be a Jack – O- Lantern on Halloween Night!

(Tune: Sing a Song of Sixpence)

First you take a pumpkin, big and round and fat.

Then you take the top off, and that makes a hat.

Then you cut a mouth, a nose, and two eyes.

Then you have a Jack-O-Lantern,

(Tune: Where is Thumbkin?)

Can be used as a Call Response

Cauldron Toss – throw bugs, spiders, ghost bean bags or anything you have.

Spider Bug Catch – Attach black Velcro onto each leg of a spider.  Make  colorful bugs out of felt.  The children pick up the bugs  using the spider on a string.

Pumpkin Toss – Get a real pumpkin with a long stem and make hoops out  of paper plates by cutting out the centers.  The children toss the rings over the pumpkin stem.

Quick Ways to Give

Shop at smile.amazon.com and Amazon will donate a portion to CTLS.

Connect With Us
OWA